Storytelling is truly an art. Everything from music lyrics to poetry to novels should draw the audience in and give them something to care about. People often forget that writing, in all its forms, is meant to tell a story – one that provides people with a reason to continue reading and to be invested in what you have to say.

But here’s the trick. In PR, just like in writing novels, we need to be invisible and let the content speak for itself. Whether you’re working on a bylined article, a pitch to a journalist, marketing materials or a blog post, the goal is to tell a story that allows the reader to make a connection without feeling like it has been pushed on them.

Elmore Leonard is one of the greatest novelists of the last century. He has written dozens of books, many of which have been adapted for both television and film. He has a gift for dialogue that most writers would sell their souls for, and he has the ability to tell a story without it feeling like he’s the one telling it. It’s as if the plots of his books just naturally unfold before your eyes – like they’re real and not written by a man in his late 80s sitting at a desk with a notebook and pen.

In 2001, Elmore Leonard wrote a guest piece for The New York Times, offering some rules for writing that he has come to follow throughout his career. While the focus of the article was on writing novels, you can see just how appropriate some of them are for the various pieces of content we develop in the PR world every day. Here are my two favorites:

Now these may seem funny, or even a little snide. But anyone who has read Elmore Leonard’s work knows two things. First, the man’s dry wit is sharper than any razor you can find. And second, he was dead serious when he wrote this.

Let’s start with leaving out the parts that readers tend to skip. Think about this for a second. It seems obvious, but who among us can say that every word we have written has been read by our intended audiences? The point here is to focus on what people care about and what they can relate to. We have all been guilty at some point in our careers of stretching out content to hit a target word count, when deep down we know that the last few sentences didn’t really add anything to the story we were trying to tell. The bottom line is, write for your audience, not for yourself. When you write for yourself, as Elmore Leonard puts it, you’re “perpetrating hooptedoodle.” And really, who wants to do that?

The second rule, as Elmore Leonard wrote, basically sums it all up. If it sounds like writing, rewrite it. If it doesn’t sound natural, if it doesn’t flow, if it feels like it was written by someone trying to push an agenda rather than content that makes valid points and stands on its own merits, go back to the drawing board. Because, if it feels that way to you, it’ll likely feel even worse to your readers.

The next time you write a bylined article, blog post or pitch to a journalist, think about the story you’re telling and who you’re telling it to. Leave out the parts that they tend to skip, and if it sounds like writing, rewrite it. And while you’re at it, I’d recommend reading some (or all) of Elmore Leonard’s novels. It will make us all better writers. 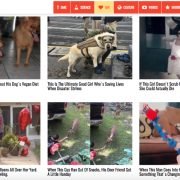 Captivate Your Audience with Dynamic Storytelling

Writer Pens Killer Headline…and You Won’t Believe What Happens Next!

The Press Isn’t Picking Up Your Company’s Story? Take Matters Into Your Own Hands.