This post was first published by Rachel DeFrank on Interprose’s blog, Interprose Voice.

Does a day go by where you, personally, do not utilize Google? We use it so much that it was added to the dictionary as a noun and a verb in 2006. In fact, four years ago, the American Dialect Society chose “Google” as the “most useful word of 2002″.

When they were back at Stanford mulling over the idea, Larry Page and Sergey Brin probably had no clue their project would become so much more than a household name. With a user-friendly design and unbelievably effective results, Google has become the only search-engine-titan worth mentioning, and today we take a moment to celebrate it’s 18 years in business!

Hooray – It’s Google’s birthday! Or is it?

If you Google “Google Birthday”, you will see slews of people poking fun at the confusion around what day that actually is. In the official company history, Google’s birthday is listed as September 4th, but has also been celebrated on the 7th, 8th, 26th, and 27th. In 2013, Google put an end to the debate and proclaimed the 27th of September as it’s official birthday. So today, with a sly grin, we will share in celebrating the search engine that honestly changed our lives.

As our celebratory infographic shows, Google now processes more than 40,000 search queries every second, which translates to 3.5 billion searches per day, and 1.2 trillion searches per year. Can you even wrap your head around those kinds of figures? Interprose, who also turned 18 years old this year, uses Google daily. Whether searching for the latest news in technology, researching publications for a client, hunting down contact info for a reporter, or finding statistics for an infographic, Google is a tool that allows us to do our job efficiently and creatively.

In addition to answering any question we could ask via search queries, Google plays parts in our lives we probably don’t even realize.

Put aside the daily usefulness of Google Maps, Google Earth, and Gmail and think outside of the Google-Branded-Box. Did you know that since 2010 Google has been acquiring, on average, more than one company per week? As of June 2016, Google has acquired 190 other companies! Most of these companies are also in the tech world and Google seems to be quickly gobbling up anyone co-existing in this space.

Just a few of the notable companies that are under the Google umbrella include:

Google is an incredible, mysterious thing, and although we could go on and on about interesting statistics, all we really want to do today is wish our friend a very Happy 18th Birthday! Live it up Google, you’re an adult now and there are some pretty awesome things you can to do now. 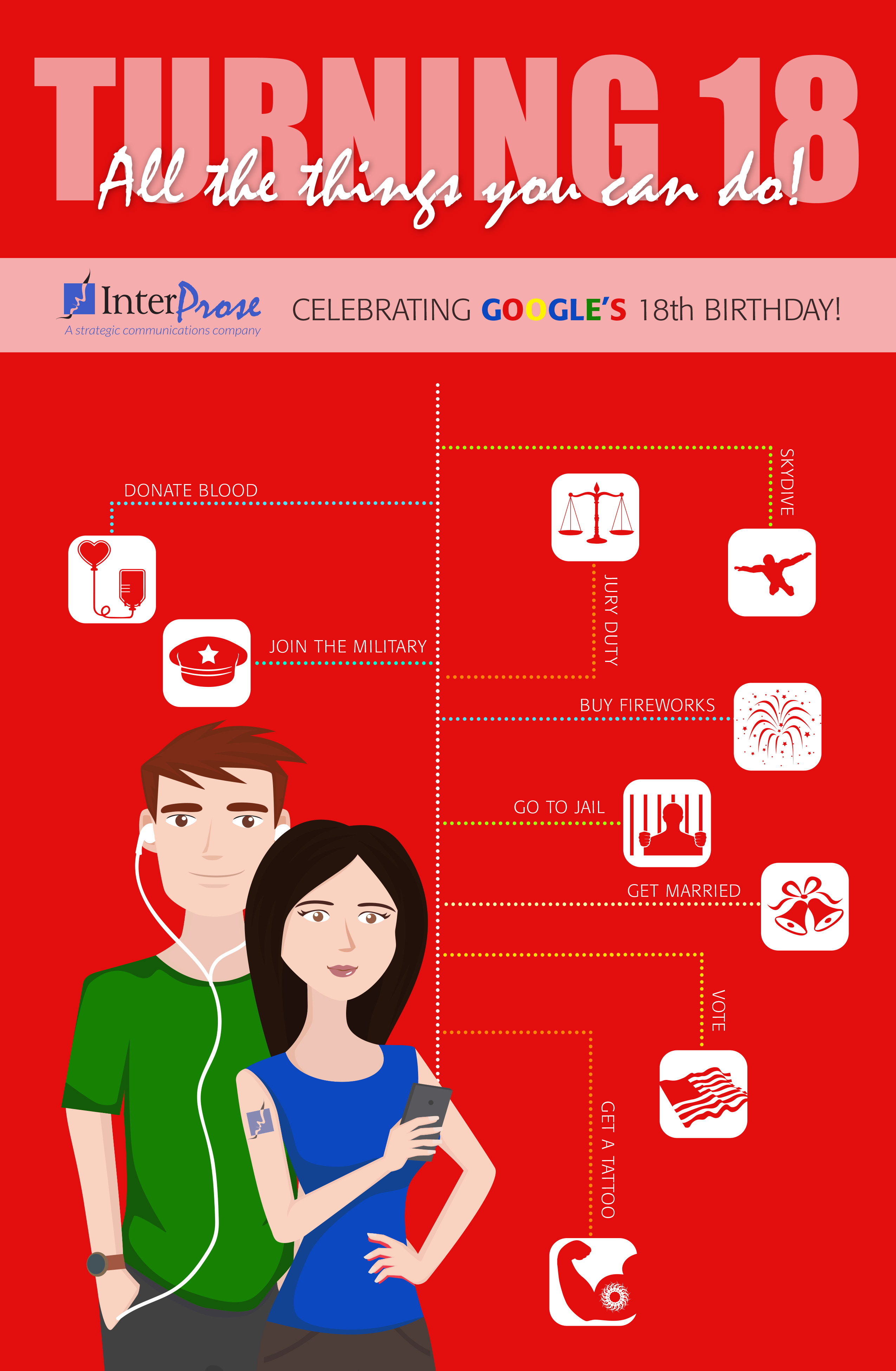 Search Wars: How to Play Nice in Google’s Sandbox
The Google-ICOA Hoax
Don’t Call It a Comeback: Google Just Made Press Releases More Valuable
Google's Musical Cloud Launched with Android App
How Is Semantic Search Restructuring the Content Marketing Landscape?
Google’s Updated SEO Guidelines: A Threat to PR? Not So Much