The German Bundestag elections 2013 will take place this Sunday. 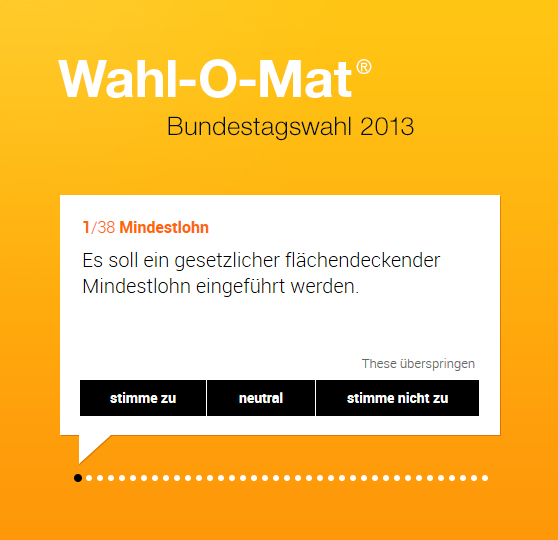 The media echo is a bit slow this year as there don’t seem to be really hot controversial topics. And be honest – who really knows the complete political programs of each party?

Especially young voters report on difficulties to identify the party that covers most of their views as the politicians covered by the media seem to have a hard time communicating the key strategy of their respective parties in a way the voters can really understand. The federal agency for political education introduced an online tool that aims to help voters to match their views of specific political topics with the programs of the parties. The Wahl-O-Mat ask questions such as „a minimum wage is planned to be installed across Germany“ do you “agree”, “disagree” or are you “neutral”? At the end of the interactive questionnaire the tool shows that your answers match the program of party 1 by 70%, the program of party 2 by 50% etc.

Renowned media like Die Zeit, Süddeutsche Zeitung or Focus are already presenting the Wahl-O-Mat or similar tests on their website. Since it’s also intended to generate interest for political topics among the younger generation, a number of pedagogical concepts with related content have already been developed to introduce political programs of the parties against the background of the upcoming elections. These pedagogical initiatives use the Wahl-O-Mat as well. 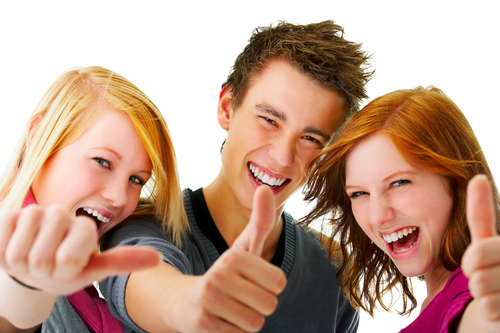 Altogether this looks like a successful approach – not limited to the younger generation. This way new media, in cooperation with established print and online publications, offer the opportunity to become familiar with complex political topics in an easy way. This does not mean users will become well informed citizens with a few mouse clicks – but it’s a first step into the right direction. And it reduces existing inhibitions among all those who do not follow the political agenda regularly. It seems to be working well – at least every four years.