We are not talking about a woolen thread nor a cotton one, nor about the technological Resistex® Carbon either and not about the famous Ariadne’s thread, even if we are considering two impervious parallel stories regarding two important brands on the fashion retail market which are trying to defend their reputation on several fronts. Different areas, different values and different geographic environment, and only one common element: the industry sector and the management of an important crisis management activity.  In my opinion there are many differences between the two cases but a singular lesson to be learned, but first of all let’s talk about the facts.

The Abercrombie case started with the publication of a book “The New Rules of Retail” which made the hostility of Abercrombie CEO Mike Jeffries towards “fat people” public.

In this way he delimits the ideal target of the brand, discriminating people who deserve to wear Abercrombie and to be a fan, just on a physical basis.  We are in the USA, birthplace of horizontal democracy and of exaggerated consumerism, in a country where social media are currently a communication channel “always on”, with a capillary penetration. Considering this scenario, could Mike Jeffries’ statement have gone unnoticed? This is a rhetoric question, obviously, and Abercrombie had to face a protest tsunami and a user generated denunciation extremely different to deal with. Among the many insurgency initiatives, which are able to polarize the outrage against the Abercrombie’s brand identity, it is worth to talk about the ones which hit the reputation of the American company strongly, on the base of their tone of voice.

Abercrombie had to face a petition published on Change.org (platform with over 20 million members worldwide which allows anyone to launch and promote a campaign for making a change) by the 18 years old Benkamin O’Keefe. The virtual petition has the goal of forcing Mike Jeffries to make his personal apologies for the outrageous declarations, also asking the brand to start producing clothes in large and extra large sizes. The petition raised nearly 74.000 supporters already, creating a public debate and aggravating the brand’s crisis situation. Why did the crisis grow so much? Because the 18 years old Benjamin O’Keefe isn’t just a “normal” detractor of the brand, but he can be considered a media accelerator of this cause because in the past he has suffered from anorexia, and also because some associations active in the United States against eating disorders gave their personal endorsement to the campaign.

Parallel to this initiative Greg Karber, a writer from Los Angeles, extremely annoyed by Jeffries’ opinions and by the fact that the brand’s clothes are burned off instead of being donated to charity, started the project #FitchTheHomeless. He went to thrift shops looking for Abercrombie’s clothes, and after buying them he donated these clothes to homeless in Los Angeles, recording everything with a camera. In the video posted on Youtube, the writer invited the users to do the same, also asking to share this effort on social media.

This initiative exceeded every expectation: over 7 millions views on Youtube, with the hashtag #FitchTheHomeless which last week, between May 14th and 16th, received over 30.000 mentions. An undoubtedly successful operation for the promoter and extremely dangerous for the brand reputation, because of the ability to unhinge the association between Abercrombie and the idea of coolness hich CEO Mike Jeffries is trying to install.

Right now it seems that a solution to the crisis has been found, due to a sudden change of course from Abercrombie&Fitch, which on May 24th is going to show the results of the first quarter and which meet with its principal detractors (Cali Linstrom, Benjamin O’Keefe, Darryl Roberts and Lynn Grefe). The company released an official declaration of apologies saying “We hope to have the possibility to keep this dialogue open, and we are introducing concrete measures in order to demonstrate our commitment to anti-bullying in addition to our ongoing support to the policies supporting diversity and social acceptance. We would like to confirm once again that we are sincerely sorry about what happened and we apologize for every offense derived from the declarations made in the past, which are against these values”.

Is this enough – just a meeting and some apologies after such a protest? I hope not, but they are still in the middle of crisis management and this is the reason why I believe we should wait for further steps.

In part two we now examine a smiliar situation in the story of “B”. 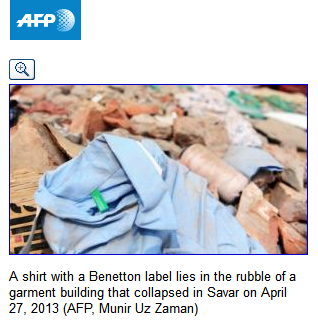 The reports about Benetton are focused on the finding of a blue shirt with the company’s label on it in the rubble caused during a tragic collapse of a building in Bangladesh, a very compromising picture of the Associated Press, able to make its way into a wide scale of international media online, on-air and on kiosks. The reaction: confusion, unbelief, media pressure, long business times to verify an extremely long supplier chain, first reckless declarations, and a pause for reflecting about how to define a strategy and an important way out.

There is much to talk about in this case “B”, there are almost all the elements to attract pressure groups against the brand and its credibility. From a crisis management point of view, this is not only an overcast but it is an event which can teach, and from whom I am expecting to learn.

The episode, after some initial misstep, gave the possibility to Benetton to adopt more responsible labour polizie, by signing a protocol to protect the safety of workers in Bangladesh, and by starting a communication strategy which actually rewarded the reputation of the company.

On May 14th “Repubblica” reported about how Benetton became the promoter of an international agreement, with other big brands on the fashion market, such as Zara, H&M, Mark&Spencer (which was also acclaimed by Deborah Lucchetti, Coordinator of the “Campagna Abiti Puliti”), The agreement is going to obligate an indipentent chief inspector to monitor safety standards in the textile mills and it will also require for factories to modernize their system.

Reactions posted, for example on Twitter, are very interesting but even more so is the fact that a crisis can actually create a behavioral improvement, a new company KPI, a goal that probably no one would have guessed to reach by managing a crisis by using communication. 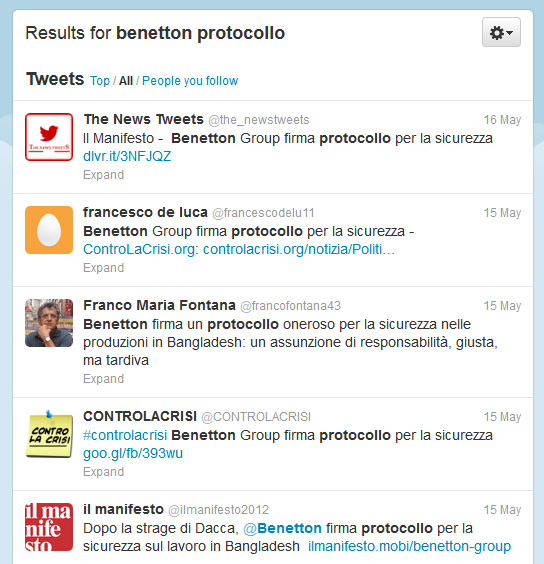 The most significant response was that a brand demonstrated its ability to listen first, and then communicate: it is a simple credibility matter. Here laids the difference, extremely deep at the moment,  between the two companies’ reactions to this difficult situations: Benetton subscribed a concrete commitment in which the company is going to invest, while Abercrombie & Fitch only made declarations about its intents.

Without making any definitive judgments, the first impression is that Benetton has a clear way out such as Nike did when it had to face the crisis about the balls stitched by children in some suppliers “factories” in the south east of Asia.

I still have doubts about Abercrombie & Fitch, mostly because I think they didn’t understand the necessity, in this kind of situation, of developping and introjecting a “new sensibility”.  These are just assumptions, but it is sufficient to look at non-verbal communication towering over the corporate websites (Abercrombie/Benetton) to figure out that Italy beats USA 2-0. On May 23 Benetton added to the Fire and Building Safety Accord subscrition a new intent, this time in direct support of the survivors and of the victims’ families caused by the collapse of the Rana Plaza Building in Dacca, Bangladesh.

Together with BRAC, Benetton is going to develop a long time program focused on families who lost their only income after this tragedy, which i salso going to provide different forms of support, including psychology assistance and rehabilitation for the injured, and training courses for workers.

(Also make sure to check out my Blog on Behind Reputation).