It’s been nearly two months since Steve Jobs died. While many of the stories that emerged following his death were memorable and enlightening, there’s one simple story that really stuck with me. It was posted on Vic Gundotra’s public feed on Google + before Steve’s death, but I only saw it after. The post, called “Icon Ambulance” sheds light on the kind of thinking that breeds, not just success, but that staggering, astonishing, mind-blowing, life-changing, Steve Jobs level of success.

Vic recalls his phone ringing during Sunday service in 2008 from “Caller ID unknown.” Naturally, he ignores the call and after the services learns the call was from Steve Jobs with this message left behind, “Vic, can you call me at home? I have something urgent to discuss” it said.

Before I even reached my car, I called Steve Jobs back. I was responsible for all mobile applications at Google, and in that role, had regular dealings with Steve. It was one of the perks of the job.

“Hey Steve – this is Vic”, I said. “I’m sorry I didn’t answer your call earlier. I was in religious services, and the caller ID said unknown, so I didn’t pick up”.

Steve laughed. He said, “Vic, unless the Caller ID said ‘GOD’, you should never pick up during services”.

So what was so important for Steve Jobs to call Vic from home on a Sunday morning?

“So Vic, we have an urgent issue, one that I need addressed right away. I’ve already assigned someone from my team to help you, and I hope you can fix this tomorrow” said Steve.

“I’ve been looking at the Google logo on the iPhone and I’m not happy with the icon. The second O in Google doesn’t have the right yellow gradient. It’s just wrong and I’m going to have Greg fix it tomorrow. Is that okay with you?” Of course it was okay with me.

A few minutes later Vic received an email from Steve with the subject “Icon Ambulance,” with further instructions on fixing this. Vic closes the post by recalling his life-long admiration for Apple that persisted even when he worked for 15 years for Bill Gates.

But in the end, when I think about leadership, passion and attention to detail, I think back to the call I received from Steve Jobs on a Sunday morning in January. It was a lesson I’ll never forget. CEOs should care about details. Even shades of yellow. On a Sunday.

And those moments when I wonder if I’m worrying too much about seemingly minute details, I recall this story. Of course, for most of us, we don’t have the luxury to become this engrossed with every detail associated with our work. But by erring on the side of caring this much about your work, you’ll rarely stray too far off course. 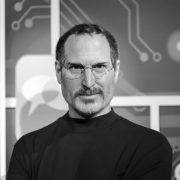 Is an Industry Giant About to Outshine Your Client? Not So Fast…