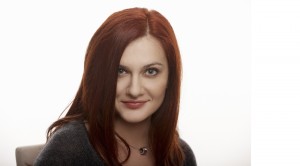 Our latest comment for the well known German PR magazine PR Report was provided by Gergana Vassileva from GlobalCom’s Bulgarian partner United Partners in Sofia. The article was published in the recent issue of the magazine (see image) but we wanted to share the English language basis for the German article with you:

Among them are bankers, politicians, business women, important Bulgarian women in international bodies. Number one is Kristalina Georgieva, the European Commissioner for International Cooperation, Humanitarian Aid and Crisis Response. Irina Bokova, Director-General of UNESCO and the first female and Eastern European to head UNESCO, holds number 5.

PR became a very common word in Bulgaria in the last 15 years. Before that it was terra incognita. Today even the children know that if they want to become famous, they need good PR. So it is no surprise that 3 of the 100 most influential women in Bulgaria are PR professionals. Why are women so successful in PR?

There is a famous saying “Behind every successful man, there’s a strong woman”. It seems to be that most women feel very comfortable in the role of a supporter and don’t need the limelight of being on stage. The are very happy to stay backstage. Women – in general – also seem to be better communicators, they are more delicate, more adaptive during periods of crisis and transformation, more flexible. Intuition and compassion are very important in PR. The clients need to be heard, nurtured, need to know that they can count on their PR specialists 100% of the time, especially nowadays with the boom of the social media. And above all they need someone that they can trust like a mother. 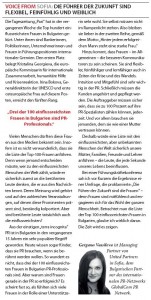 It would be interesting if we make a research what the percentage of the women in PR profession is. My guess would be more than 80%. Even if the boss is a man, he often prefers to hire women.

But what about the people who are influencing and changing the society without being famous? The people around us who are changing our lives every day? The real influencers. I wish someone makes such a survey. It is easy nowadays with the social media. And somehow I trust that on the top of the list would be our mothers, families, friends, teachers. The people who influence every second of our lives.

At a leadership conference I recently saw the results of a survey which proclaimed “the leaders of the future are women “– because women are compassionate and dedicated to the well-being of the whole humankind. Looking at the list of the Top 100 most influential women in Bulgaria I truly believe in it. Time will show.