Ricardo Durand of GlobalCom PR Network’s partner agency EDC in Portugal provided the current comment for PR Report magazine. The article was published in the recent issue of the magazine in German (see image) but as Ricardo provided his comment in English we are able to share the original version with you: 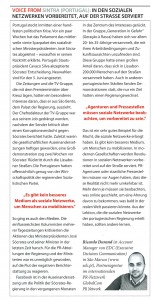 Portugal is in the middle of a politic crisis. The measures to enforce the economic situation were refused in the parliament a couple of weeks ago and the prime minister, José Sócrates resigned. Cavaco Silva, Portugal’s presidente accepted the decision of Sócrates and new electuons are scheduled for June 5th.

The reference newspapers and a TV network that had issues with the prime-minister in the past (the editor in chief was forced to leave the network due to some news concerning a supposed case of corruption involving Sócrates) were eager to see him out of São Bento (the offical residence of the prime-minister). Social contestation was beggining to grow and a large manifestation took place in Lisbon two weeks before the resignation of Sócrates.

People had enough of the economic measures taken by PS. And so had the media.

Facebook took central stage in the contestion to Sócrates behaviour in the last months. A group was created – Geração à Rasca (Generation in Danger) – majorly composed by people with 20-35 years old, that were not satisfied with their working conditions. This Facebook group made an extraordinary effort wich led to the presence of two hundred thousand people in the Lisbon (the capital) streets. In other Portugal cities public demonstration took place with only onde thing in mind: change of leadership was mandatory in Portugal.

This is a very good case of the strenght that the social media have nowadays. It can mobiliz 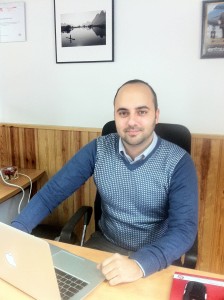 e people like no other. In modern society revolutions are cooked in the social networks and served in the streets. The PR agencys or the state press offices have o bear in mind that this reality is irrevelsible. So, more than ever, thay have to monitorize what is going on on-line to forecast what is going to happen soon. Know that Portugal prepares to choose another prime-minister, we should learn from this lesson os streght that the social media and networks teached our leaders.