Industry 4.0 and IIoT are more than just cryptic letter sequences. The terms stand for topics that concern everyone – businesses as well as consumers. About their meaning for companies and communicators.

“How can we design more effective and efficient work and production processes?” This question has been asked by companies in all industries since the beginning of modern business. However, the rapid development in the course of digitalization poses challenges for many. One result of this development is the so-called Fourth Industrial Revolution or Industry 4.0 which, as the name suggests, is the fourth major step in the evolution of industry: Step one was mechanization using water and steam power, followed by mass production using assembly lines and electrical energy as step two, and step three was the introduction of IT for the electronic control of machines and automation of individual production steps. Up to this point, companies were collecting data on every step of production at two levels: the field level and the control level. With Industry 4.0 and the accompanying digitization of all information, a third level was added: the system level. 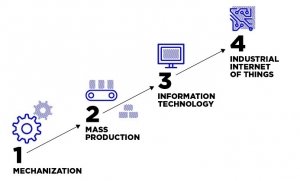 The Story So Far: Collecting and Transporting Data

At the field level, data is collected directly within the machines and devices. A simple example is the fuel tank of a car: a sensor measures the fuel level. One level “above”, at the control level, the information obtained by the sensor is processed and transported to where it is needed. The sensor electronically transmits the acquired data to the fuel gauge, thus informing the driver. There are two types of data: process data and service data. In our example, the service data may include the average consumption per kilometer. The driver is then able to adapt his driving style based on this data. Process data, on the other hand, is evaluated directly because here functionality and safety of machines and users are at stake (“Is everything running as it should be?”). In case of a malfunction, the machine itself takes protective measures. In the event of overheating, for example – a function often used with power tools – it turns off.

With the third level, the system level, the acquired data literally takes on a whole new context: with the possibility of machines directly sending data to higher-level systems or a cloud, the data generated by different machines, plants and entire production facilities can be correlated (Big Data). This networking of devices and the bundling of data in the cloud is the Internet of Things (IoT) – as for the industrial context, the Industrial Internet of Things (IIoT). With the Internet of Things, the heating system at home, for example, is connected to a common smart home network with automatic shutters and smoke alarms, all being controlled by a central unit. In the case of the Industrial Internet of Things, for example, different production machines in a factory are connected to other machines in the production chain. 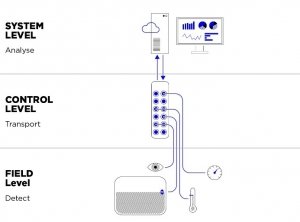 In such a digital ecosystem, the collected data is bundled at one point. Software platforms make it centrally available and accessible for companies at any time and from any location. The system-level fulfills two types of functions: On one hand, it collects, condenses and controls the generated data. This enables constant condition-based monitoring (CBM) of the machine. In addition, production managers, for example in the production of automotive components, see exactly where in the production process single steps can be performed more efficiently and therefore adjust them accordingly.

The second function of the system is to actively intervene in the control if the contextual analysis proves this necessary. For example, in CBM, the system perceives that a particular machine is reaching the end of its average service life based on the data obtained for all parts and devices of the machine. The system can then directly initiate the ordering of new components and prevent a shutdown. This way, the system can even operate without the intervention of a person. The smarter the system, the more autonomous.

This rapid development triggered by digitalization results in three advantages for Enterprise Resource Planning (ERP), i.e. the planning of time and resources of a company or department. Processes can be

The degree of each work step’s transparency is higher than ever. This enables a constant, faster and better adjustment of work. In addition, the Internet of Things is giving rise to new business models: companies are opening up their platforms to clients or using the corresponding customer platforms to further develop their products and solutions together. A well-known example is the cloud-based, open IoT operating system Siemens MindSphere, that connects products, plants, systems and machines and gives developers and users access to lots of data.

Significance for Business and Communication

Digitization holds great potential for the further development of companies, but it also increases competition. Processes are accelerating. Companies are under pressure to quickly improve, to develop new possibilities for efficient and effective production and an even better product. Due to the high level of transparency, companies’ actions are under public observation more than ever. Companies refusing to take part in this race risk losing their license to operate – in other words, the social acceptance on which the company’s reputation is based. After all, digital change thrives on the idea of disrupting entire industries.

Results of the Digitization Study: Do You Speak Digital?

Only two percent of the communication on digitization in German SMEs comes from the companies themselves.

The topic is, therefore, a sensitive one: companies must proactively report to stakeholders on their progress – that is not easy with such a complex and convergent topic since all areas of life are affected and brought together. This is also shown by the digitization study on German SMEs conducted by Communication Consultants and VICO: companies still communicate little about their own digitization competence and tend to talk product and technology-driven, rather than picking up the target groups’ personal references and levels of knowledge. Only two percent of communication on the subject of digitization in German SMEs comes from the companies themselves (see graph).

It is important for communication to make highly technical aspects understandable. And not only externally: employees are also part of this journey. After all, the workforce must live and breathe the rapid adaptation. Change becomes a permanent condition – and with it the accompanying communication. New skills in software development are becoming more important. It requires training, further education and entrepreneurial spirit to constantly question and optimize one’s own processes. In drastic cases, companies must be prepared to completely restructure in the face of digitization, IIoT and Industry 4.0. An exciting challenge – now as well as in the future.

Communication Consultants is an official member of the GlobalCom PR Network.