Learn how the financial crisis influenced the media landscape PR practices in Portugal and how the PR team of GlobalCom’s partner EDC in Portugal successfully utilizes new communication channels and PR opportunities in their daily work practices.

1.  What is the latest trend (change) in PR you have identified in your region?

Ricardo Durand: The financial crisis is the main issue in Portugal’s agenda nowadays. So, apart from the recession in buying newspapers or magazines, new titles are on the line in our country. For instance, PC Guia, one of the most reputed IT magazines that closed doors in January, had a rebirth and is “alive” again with an out of the box design and new people (although, the director in chief is still the same). A new economic newspaper is on the line too, scheduled for the end of this month. But the online media is, in fact, growing with new and good IT websites that can upload the news as we launch the PR. This is, in fact, a big change in the media environment in Portugal, helped by the presence of those newspapers, magazines and IT websites in Facebook, that “triple” the information release. So, the same news apperars in the press edition, in the site and is spreaded again in the social networks like Facebook and Twitter, allowing the interaction with a wider audience.

Another thing that we are experiencing is doing interviews by e-mail. For quick inquiries, mainly for weekly media, they sent us the questions for us to pass on to our customers. Sometimes, we can save time by calling them and recording the answers by phone. In think this is a very good practice here in EDC, as we deliver a good service to the brands and they can express themselves better.

2.  How does your agency handle / embrace this?

Ricardo Durand: I think that those new methods made our work easier. We can even talk with the journalists by Facebook or Messenger. This streghtens the relations between us and them. We have also a blog were we post the PR from our clients and a page in Facebook to enforce this communication.

3.  Can you give a recent example from a project or best practice?

Ricardo Durand: We are making a strong effort in lead generation marketing campaigns for our clients, including the creation of a design package and a follow up of telemarketing. For instance, we have come up with the idea of sending a tiny vault with a presentation inside for the prospects of our client Axis Communications. This is a new approach than can be replicated too for selected journalists as an invitation for a press conference. We think that due to the shrinkage of the editorial staff, this can be an extra motivation to convince journalists to attend press conferences.

Next week Ricardo will report on some general local differences in PR and communication practices in Portugal. 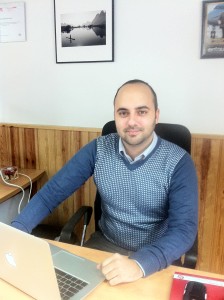 Ricardo Durand is Account Manager at EDC – Comunicação, Marketing & Eventos, based in the outskirts of Lisbon and partner of GlobalCom PR Network in Portugal for the IT market. EDC – Executive Decisions Communication is specialized in PR for IT companies with know-how in the areas of media relations, communication, design, commercial consultancy and telemarketing.

Ricardo graduated at the Escola Superior de Comunicação Social in Lisbon and worked as a trainee at Verlag Dashofer, the Communication Department of Fnac stores and SIC (tv network). From 2005 he worked for one of the big three IT magazines in Portugal – BiT – first as a trainee, and then as Coordinator and Editor in Chief. He left BiT in October 2010 and made his debut in the PR in January 2011 as Account Manager in EDC.