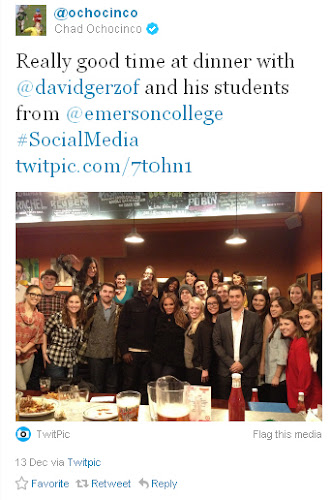 Last Monday, New England Patriots wide receiver and reality television star Chad Ochocinco took an entire Emerson College social media class out to dinner in Boston. The venue was Inman Square’s All-Star Sandwich Bar, and the discussion was anything and everything related to social media and product branding. One question that might immediately come to mind is: “What on earth does a football player know about social media marketing, and product branding?” My answer is that, in this area of marketing studies, he is more than worthy of the title “Professor Ochocinco.”

This isn’t the first time we have taken a look at Ochocinco’s Twitter account, and it probably won’t be the last. His is a living, real-time case study on the pursuit of brand perfection through social media.  With over 3 million followers, Ochocinco has a diverse audience that ranges from sports fans to reality television fans, to those who follow his fiancé, “Basketball Wives” lead-woman Evelyn Lozada. Ochocinco devotes an ungodly amount of his time trying to engage his followers on Twitter, either by responding directly to their questions, challenging them to matches on Xbox Live, or even asking if he can room in of their houses for a while.

Not all of his experiments in social media engagement work, however. Today, he issued an open challenge to Twitter hackers to gain access to his account. The hackers won… in nine minutes. While the latter example was obviously not a very good idea, it does display Ochocinco’s willingness to push the envelope in engaging his followers.

Ochocinco realizes the marketing power of Twitter, and how it can act as a neutralizing force during times when other forms of media may be pushing a more negative brand image. “[My image] is controlled by whatever the media portrays me to be. But with Twitter I control it and control what I say. If you want to know what’s going on in my life you can actually follow me. Twitter cuts out the media middleman,” he told the Metro last week.  He understands the interaction from his followers’ point of view as well. “You might not be able to actually talk to celebrities, but the fact that you can reach out is enough for fans. It has a certain excitement to it.”

Ochocinco has been regarded as one of the premier Twitter-lebrities online, and was recently selected by the New York Times’ David Leonhardt as the second most influential person on the platform. He has developed a charismatic, funny personality through the medium, and continues to gain good favor among followers, even though his 2011 football season has been relatively disappointing.  Ochocinco, perhaps it’s time for a career change?

What do you think? From a brand perspective, is emulating the social media strategies of influential celebrities a good idea, or one that should be left in the locker room?

This post was first published by Jason Fidler on March Communications’ blog, PR Nonsense, and may be viewed here.