There are so many social media tools out there, it’s hard to know what is what, and what is for what. For me Tumblr is one of those tools. I’ve heard it in passing a lot, but never really used it myself. That’s why Brenna Ehrlich’s article in Mashable, The Pros and Cons Of Tumblr For Small Business, caught my eye.

Brenna’s piece begins discussing how more and more business are getting “hip” to Tumblr, specifically those in the fashion industry. Maybe that’s why I’m not as familiar with the social media platform – being in the high-tech space and all.

Anyway, the piece gives a lot of insight for Tumblr newbies or others looking for a blogging platform. Here are the pros and cons that stuck out to me the most:

While the pros seem to outweigh the cons, another thing to be mindful of is your target audience. Mark Coatney from Tumblr says that in the U.S., the company’s audience tends to be younger — 56% of the service’s 25.2 million monthly visitors are under 34, which would make sense for why it’s so popular in the fashion industry.

Like any social media initiative, companies need to be sure they’re adequately assessing the goals and objective of their project, before launching into it full force.

This post was first published by Juliana Allen on March Communications’ blog, PR Nonsense, and may be viewed here. 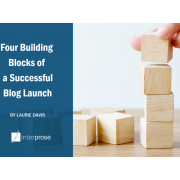 3 Ways to Micro-Target Your PR Pitches

Blog for Your Actual Readers, Not Your “Wish List” Readers

5 Fast and Easy SEO Strategies for Your Blog