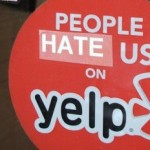 If you are a business owner or company executive, you probably should be worrying about the Online Disinhibition Effect. According to research conducted by Rider University psychologist John Suler, it’s the Online Disinhibition Effect that inspires people to act badly – very badly – on websites, blogs, chat rooms, forums or social media platforms like Twitter and Facebook. Thanks to the anonymity of online communications, normally mild-mannered people are capable of writing things that they’d never dream of saying in real life. Some even become internet trolls, posting malicious or inflammatory messages. And if the rancor focuses on a company’s products, services, employees or events, it can end up causing serious damage to the business.

An online storm can get sparked for any number of reasons, and sometimes it catches fire for no discernible reason at all. Given the power of digital and social media today, business owners should pay careful attention to what angry Yelpers, Twitterers or bloggers say about their brand. Whether and when they choose to respond can prevent a bad review from turning into a brand disaster.

When to Respond to Online Criticism
The most direct way to respond to a negative comment is, of course, to attach a rebuttal to the criticism on the original posting site. For example, Yelp, which is one of the most active and well-regarded review sites on the Web, allows businesses to respond to reviews made about them on the site. But some businesses – or rather, their owners, executives and/or spokespeople – have neither the marketing skills nor the writing talent to respond effectively to negative reviews. If you do have a strong command of your company’s brand identity and can write your comments skillfully and persuasively, replying directly to online criticism is something to consider. But consider it cautiously. Although you may be able to cast your company in a better light, you might instead end up adding fuel to the online fire.

There are, however, at least five instances when you should respond directly to a negative comment.

1. You genuinely need to make amends.
Sometimes a company just goofs. Your company delivered a bad product, missed a deadline, provided less than perfect service, mixed up an order, or in some way failed to live up to its best intentions. Most people understand that mistakes happen once in a while. If a client is legitimately upset about a failure on your part, it’s usually in your best interest to engage them and attempt to make it right. Often it doesn’t take much to smooth over one bad experience.

2. They are misstating facts.
Let’s say your company is being blasted for providing an inferior financial service and not sticking to the promised 40 percent off discount. But your company provides legal services, not financial services, and you definitely don’t offer 40 percent off coupons. If that’s the case, speak up. Politely let the customer know that they may have misunderstood your services or perhaps they’ve confused your company with another. If it’s a matter of bad facts, step in to correct them.

3. A crazy review develops legs.
Sometimes an off-the wall review starts to gain traction. Negative comments begin to pile on, with lots of “me too” replies. These situations absolutely need to be addressed and they need to be addressed fast. If you stay quiet and tell yourself that the complaint is simply too crazy to merit a response, you’re almost certainly inviting the fire to spread to other online sites or platforms. The best way to contain this type of mess is to face it directly. Get in the conversation with a brief, polite and truthful response. Often just stating a few obvious points will be enough to expose the insanity. Then bow out of the conversation and let the fire burn out by itself.

4. It really is about you.
Some people are simply motivated by a desire to spread unpleasantness. If that’s all a negative comment is – one person’s mean-spirited grab for attention – let it go. Yes, the criticism will remain visible online but engaging a miserable person is likely to incite a more damaging war of words. If the comment isn’t outrageous or slanderous and if it isn’t snowballing on its own, don’t draw more attention to it by responding. Hopefully there will soon be enough positive reviews to push the critical comment down to a less conspicuous position. But if the person is legitimately angry with you or your company, then it’s back to the first point: you need to make amends.

5. When someone else reads the criticism and agrees with it.
A company’s owner, executives or employees are not always the best judges of whether or not a review deserves a response. It may seem to an in-house person that the bad review was simply written by some troll with a grudge against the company. And perhaps that is all it is. But every now and then, get someone else’s opinion about all those awful people who are spreading lies about your company online. If a neutral third party thinks the problem may actually be with the company and not with a sudden eruption of trolls, then at least you’re getting honest feedback. And in that case, it’s back, once again, to making amends, as quickly and as graciously as possible.