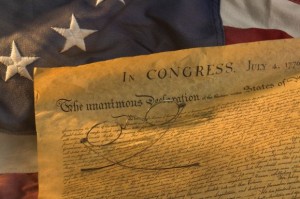 “We hold these truths to be self-evident, that all men are created equal, that they are endowed by their Creator with certain unalienable Rights, that among these are Life, Liberty and the pursuit of Happiness.”

That legendary line gives me pride as an American, and it gives me goosebumps as a PR professional. Thomas Jefferson and the gang knew it was their destiny to change the course of history long before the Declaration of Independence was drafted, but they also knew that their vision was unattainable until they could inspire the public to join their cause. In the years leading up to the Revolution, our founders became public relations pioneers as they successfully won the hearts and minds of the new world. As we celebrate another proud year of independence, let us remember three of these influential innovators and the PR lessons they have passed along:

Samuel Adams: Publicity by the Pint

As his name became synonymous with an ice cold American tradition, Samuel Adams pounded the streets of Boston, shining a light on the inherent injustices of British rule. In 1770, a conflict between British soldiers and American civilians that began as a snowball fight left five of those civilians dead and prompted Adams to use PR as retaliation. Adams bravely wrote and distributed essays condemning that event as “The Boston Massacre,” a headline that quickly spread throughout the other 12 colonies.

Agitation between the colonists and British authorities grew over the next few years, leading to the famous Boston Tea Party, where colonists dressed as Indians destroyed a huge quantity of British-owned tea to protest new taxes on tea and other goods. Adams and the rest of the protestors cleverly justified this event with their catchy rallying cry “no taxation without representation.” He publicized and defended that event until the ink of his pen touched The Declaration of Independence.

Samuel Adams showed the PR world the value of framing an issue or event. The headlines from the Boston Massacre could have easily read “Snowball fight leaves five dead,” but instead Adams contextualized the tragedy through the eyes of the Bostonian colonists. As public relations practitioners, we, like Adams, have the responsibility to take initiative and ownership over issues and events that affect our clients so that their perspectives have an opportunity to be recognized and embraced by the public.

“It does not require a majority to prevail, but rather an irate, tireless minority keen to set brush fires in people’s minds.” ~ Samuel Adams

Benjamin Franklin was a media innovator. This fiery Philadelphian was called “The Patron Saint of Advertising” because he effectively used newspapers, pamphlets, letters and other contemporary resources to sell products and ideas to the public. Franklin learned the printing trade as a boy working in his older brother’s shop in Boston, and he continued writing and publishing throughout his long, remarkable life.

Franklin’s extensive media background made him an invaluable PR figure in the years leading up to the revolution. As a spokesman for the colonies to Great Britain and other European nations, he used multiple channels to communicate on their behalf. His media knowledge allowed his pen to stay busy as the pending war started to look inevitable. Likewise, each stroke of wit, humor and inflammatory remark he printed brought the public nearer to accepting the reality of the Revolution.

Benjamin Franklin mastered the media channels available, allowing him to bolster public sentiment for the founders’ mission of freedom. Like Franklin, we in the PR community should hold a deep understanding of the media outlets we work with in order to form mutually beneficial relationships that allow us to create opportunities for our clients to tell their stories.

Affectionately known as the great pamphleteer of the American Revolution, Thomas Paine fueled the public’s hunger for an independent America through wit, determination and common sense. A perpetual troublemaker, Paine could not resist emigrating from Great Britain to America in 1774 upon hearing whispers of a push for independence. He became editor of the Pennsylvania Magazine when he arrived, a position that warmed up his pen for arguably the most influential American essay ever written.

Common Sense, published anonymously by Paine in January of 1776, united the American public under the goal of independence. Had social media existed back then, this essay would have been trending upon release and throughout the duration of the Revolution. Through a brilliant mix of allegory, facts, and a powerful call to action, this pamphlet turned New Yorkers, Pennsylvanians, Virginians and other colonists into Americans. At that point there was no turning back, and on July 4th of that year a new nation was born.

Thomas Paine’s principled work is something every PR professional should strive for. We have the duty to show commitment to our country, company, clients and our media counterparts. Thomas Paine changed the world with a sincere and potent string of words, and as public relations professionals I know we can too!

“An army of principles can penetrate where an army of soldiers cannot.” ~ Thomas Paine

Our founders demonstrated that public relations should be a noble practice, one that is deeply rooted in our nation’s heritage. As we celebrate a safe and happy Fourth of July, let us not forget the timeless lessons of the bold communicators who came before us! – Brian Hart, Account Coordinator at Jennifer Connelly Public Relations. Follow Brian on Twitter @BrianHartPR

4 Things to Remember When Creating a LinkedIn Company Page

5 Ways to Measure the Impact of a Digital PR Campaign

How to Maximize Your Meetings in a Multi-Tasking World

4 Rules for Making an Infographic that Rocks